It's finally starting to cool down in California after a very long, hot summer. The holidays are also just around the corner and it's very exciting. Yesterday, we took Aiden to the pumpkin patch and got some great shots of him. 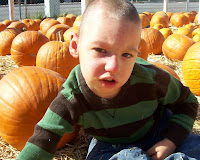 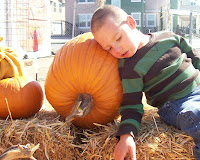 Progress report: Aiden's mood is 90% better than it was a month ago. He is so much happier and it seems as if there is no more pain at all. He tolerates going out and being around people and isn't so afraid anymore. The last article published in the newspaper talked about how Aiden didn't like to be tickled anymore. Well, now he laughs that great Aiden laugh when we tickle him. The doctors were right; he just needed time to heal.

Aiden is walking everywhere! He'd rather walk than crawl and he's getting so much better at it. And he just loves to be outside. So much so that we decided to buy annual passes to Disneyland so Aiden can practice even more walking and enjoy all the sights and fun stuff at Disneyland whenever we want! We are going to take Aiden this coming Sunday and it will be his first time! We are so excited to take him!

Before his surgery, Aiden only ate baby food because he has texture, flavor and chewing issues. He didn't like anything homemade because it has too much flavor. Well, a few weeks ago, we were having lunch together. Aiden was feeding himself his pureed food and I was having soup. He took my spoon and fed himself a bite of my soup and went back for more. He ended up eating 1/4 of soup and took some bites of cracker. Later we went to Costco and he tried yogurt and a berry smoothie. He loved it. Now each meal consists of at least some "real" food and with practice and therapy I know he will chew one day!

Although Aiden still can't say any words, he tries to imitate the sounds he hears. So, if you say banana, he says "hu-hu-hu", or momma is "nan-nan" and uh oh is "uh ah". This is pretty cool because before the surgery all he said was "da-da-da-da-da" to everything. I'm looking forward to when we can take him off Topamax because that drug is a language inhibitor.

I have always felt with Aiden that every little accomplishment is worth celebrating. So even though these things come naturally to most kids, it takes hard work and much practice for Aiden to reach these milestones. I am so proud of him!