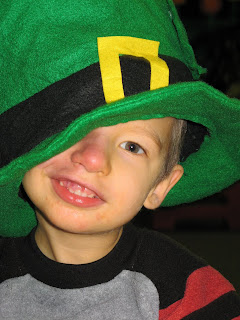 So, we took Aiden in for his 6 month post-op MRI on March 5th. This was for Dr. Mathern to make his first assessment of the healing process and to check for any surgery related complications. I was very anxious to hear the results when we met with Dr. Mathern on the 9th because I was worried that Aiden might be suffering from hydrocephalus (too much fluid pressure on the brain). Well, the scans are all clear and Dr. Mathern said everything looks great in there. He said the hitting and head-butting are behavior issues most likely due to frustration and/or weird sensations caused by the healing process.

When I saw the MRI scans, I was surprised to see so much brain tissue left in there because I was under the impression that the entire right hemisphere was removed. Dr. Mathern explained that the procedure he performed is a hybrid he designed. It's something between a hemispherotomy and functional hemispherectomy. I'll try to explain in summary. In a Functional Hemispherectomy, the two hemispheres are disconnected and only portions of the non-functional/epileptic areas are removed. Hemispher(otomy) is when all of the major white matter pathways connecting the lobes of the hemisphere to each other and the contralateral hemisphere are divided, but the bulk of the brain tissue is left in place. (Credit to Cedars Sinai and Cleveland Clinic websites for the explanation).

Here are some screenshots of the post-op CT: 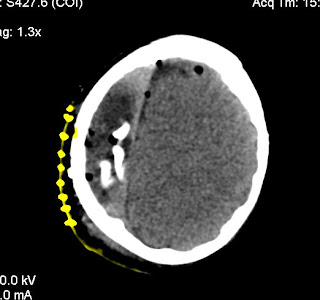 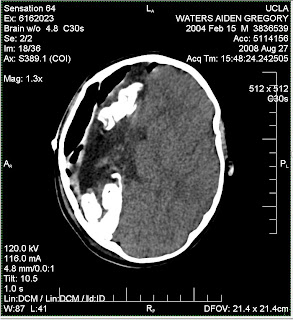 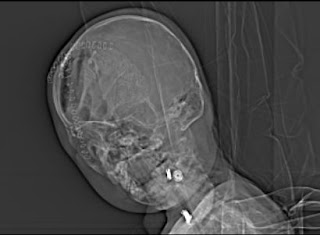 and a video of the MRI scans (caution! this is kinda creepy if you're not used to this sort of thing):

I'm looking into behavior modification therapy to help him deal with his frustrations of not being able to communicate verbally. The school he goes to offers this type of program, so I'm anxious to see what happens with that. The absolute last resort would be medication to help the behavior.

Thanks go out to all who kept Aiden close in thought and prayed for good MRI results. I received so many emails in response to my post "self-injurious behavior" and they all meant so much to me. So, thank you again!

We are, of course, glad to hear the good news about the MRI results. Thanks for the explanation of the differences in surgery. But most of all thanks for the cute picture of Aiden in his St. Patrick's Day hat.

Our Best from Texas.

Wow! I'm so glad the MRI scans look good. Thank you once again for giving me more education about hemis.