Aiden is finally starting to be a little bit more adventurous when it comes to food. Two days ago, we were having lunch together. He had his usual pureed food and I was having chicken and vegetables. He kept looking at my plate and putting his spoon just on top of my veggies. Pretty soon, he took a scoop of brocolli with his spoon and put it in his mouth. He let it fall out of his mouth and then went in for another bite. It was like he thought it looked good and he was determined to try it even if he didn't like the texture in his mouth. I gave him serious props for even trying it in the first place.


Last night, we had roasted pork, mashed potatoes and gravy. Usually if he saw that we had put homemade food in his bowl, he'd have a fit. This time he watched me put a scoop of potatoes and gravy in his bowl and he just went for it with no hesitation. He ate the whole bowl!!!

Today at school, the class made homemade chocolate ice cream. His teacher said Aiden didn't want any part of the making of the ice cream but he gobbled up a whole bowl! Oh, and he actually took bites of these Veggie Straws I packed for him. They are like cheese poofs but made of veggies. 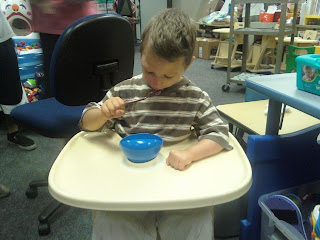 Now that Aiden is showing he is more open to the idea of trying new things, we're gonna run with it and hopefully, soon, he'll start to chew and eat a bigger variety of foods. No more baby food!! That would be awesome.
Posted by Aiden at 1:52 PM

glad to know that Aiden is trying different foods. can't wait to hear your favorite foods so far when we meet you at the reunion

Oh Yes! The big kid is gonna be eatin hamburgers before you know it. Way to go Aiden!