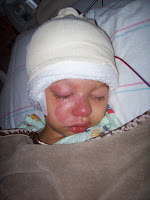 Getting to see Aiden took a while longer than expected. We were finally allowed to go to the PICU around 10:00 PM last night. Aiden was awake and in discomfort. He would open his eyes and look around at all of us and we were told he had been moving both legs and right hand and arm which is fantastic. There is little to no movement in the left hand and arm, which we expected. With time that will get better.

Throughout the night and morning, Aiden only woke up and a few times and complained a little but not too much. I would hold his hand and hum softly to him and he would quickly drift off to sleep. The nurse said Aiden hasn't needed any pain medication and they don't plan on giving him any unless his vitals show he needs it and/or he seems to be in a lot of pain. In fact, the only drip Aiden is on is fluids, no meds. His breathing, blood pressure and sodium levels are all stable. That is such a relief since we were told when Aiden came out of surgery, he'd probably still be intubated, on a ventilator and heavily sedated. But he proved that theory wrong. He is so amazingly strong!

Also, early this morning, I was sitting next to him and I saw his eyes open so I started talking to him and stroking his hand and he smiled at me. What I noticed is that he had a full smile, meaning both sides of his face are functioning. I've heard of kids coming out of surgery with a half smile, temporarily.

We have so much to be thankful for. I am just amazed at him, as always.
Posted by Aiden at 10:19 AM