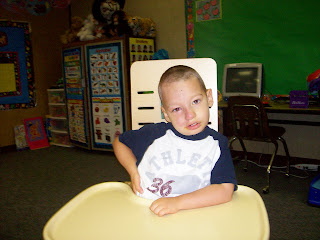 Aiden went to school three days this week but for only an hour at a time. The first two days, I stayed in class with him so I could see when he was ready to go home. He got very upset when I brought him into the classroom. He cried so much and that just isn't like him. I asked Pam, his teacher, why she thought he was so upset and she said because I was there. So, today, I dropped him off and after an hour, I called Pam to see how he was doing and she said he did better. I took him home shortly after that and he went right to sleep. Sleep is very important right now because he is still healing.

Physical and occupational therapy will start next week. He will now be getting both of these therapies three times per week. He will also have one-on-one speech therapy in addition to group. We are going to put off feeding therapy for another week or so just because we don't want to overwhelm him. Aiden will also get fitted for a new pair of DAFO's. Those are the braces Aiden wears to help him walk.

Aiden wants to walk more and he's getting better at it. He has more balance and strength because we practice every chance we get. He takes us by the hand and leads us where he wants to go.